Abbottabad is a beautiful city of Khyber Pakhtunkhwa. Another name of Abbottabad is “City of Pines”. The reason behind this name is the presence of pine trees throughout the Abbottabad city.

Mansehra is towards the north of Abbottabad and Rawalpindi to the south. Muzaffarabad is to its east and Haripur to the west.

It is very beautiful because of the mountains and valleys. Abbottabad is a developed city of KPK. Moreover, it is very famous for its educational and military establishments. There are also many beautiful places in Abbottabad.

I have been to Abbottabad a number of times. It is worth visiting every single time and shows its wonders more beautifully. So, why not visit Abbottabad this summer with TourMover?

“I can’t look at the modern buildings without thinking of historical ones”.

During the British rule, Abbottabad city was the headquarters of Hazara division. In 1853, Mr. James Abbott founded this town after Punjab’s invasion. He ruled Abbottabad from 1849 to 1953. He loved the city so much and also wrote a poem for “Abbottabad”.

Do you want to listen to the poem??? A very interesting and emotional poem… I liked it so much and I am sharing it with you… 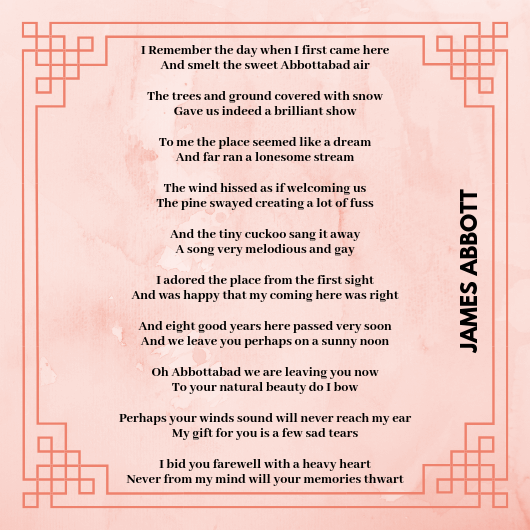 Oh! I hope you have enjoyed the poem. Above all, this is true because Abbottabad is a very beautiful city.

In the 20th century, Abbottabad turned into an important military cantonment. For foreign countries, Abbottabad is famous as the place where Osama Bin Laden lived and was killed.

In addition, the city became attention for the entire world because of Barack Obama in 2011. He announced that Osama Bin Laden has been killed in his compound in Abbottabad on May 2, 2011.

Despite all these misfortunes, Abbottabad continues to be an attractive and prosperous city. People from all over Pakistan visit beautiful places of Abbottabad every year.

Some of the historical buildings of Abbottabad include:

People and Culture of Abbottabad

People: The people of Abbottabad are highly educated and peaceful. They are very good and friendly. I have many friends and colleagues from Abbottabad. They are very well-mannered, hospitable and welcoming.

Dress: The traditional dress of Abbottabad is Shalwar Qameez for men. Women also wear Dupatta with Shalwar Qameez. As people are qualified so they wear pants, coats, and waistcoats etc.

Most of the people in Abbottabad wear unique designer dresses. The society of Abbottabad is highly developed and advanced.

Cuisine: Maize, wheat, and rice are the favorite food of people. Village people also like Lassi and Desi Ghee. Moreover, there are high-quality restaurants with a variety of special foods.

Most importantly, I would recommend you to visit Nawab’s restaurant and MNAK restaurant on Abbottabad road. Their cuisine is delicious and the environment is amazing, literally!

Some best educational institutes of Abbottabad include;

Moreover, the city is well-developed in terms of infrastructure. Many students from KPK prefer educational institutes in Abbottabad to get a quality education.

In conclusion, Abbottabad is small but a developed city of KPK.

“Once a year, go someplace you’ve never been before”.

I suggest you visit Abbottabad this summer. TourMover is always here with best packages.

Abbottabad is the major attraction for many tourists. This is due to the reason that it’s a gateway to some of the most beautiful places in Pakistan.

These include Nathiagali, Naran and Kaghan valleys, Ayubia etc. Karakoram, Himalayas, and Hindu Kush mountains are approachable through Abbottabad.

Tourists visiting any of these places of Pakistan cross Abbottabad on their way. In the summer season, people rent houses in Abbottabad to spend their vacations.

Many people from several cities of KPK have relocated to Abbottabad for jobs and education. They are attracted to the beauty of this small and prosperous city.

Apart from being a gateway, there are numerous tourists attractions in Abbottabad. Several people visit these places every year for tourism.

So, let’s visit Abbottabad with TourMover this summer and enjoy delicious Pakoras at Ilyasi Masjid, Abbottabad.

When talking about the culture of this unsung jewel of KPK, the hospitality and magnificence of locals, storytelling among folks, stone carving, wood carving, the ornaments, embroidered accouterments, and handicrafts of Swat can’t be overlooked.

Be the first to comment “Abbottabad History” Cancel reply